I’ve had such fun with “The Fishing Lesson” book! On September 20th, the beautiful sculpture was unveiled at City Park, and I was honored to present the Mayor with a copy of the book. Here’s the boys and me by the statue, as well as a pic of me with talented sculptor and illustrator Paul Rhymer. 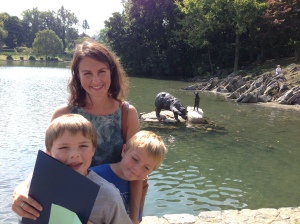 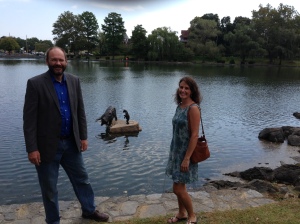 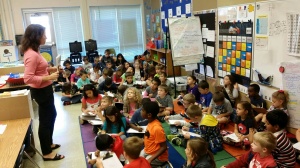 …and the second graders about how to write a story. Thanks for scheduling my visit, Mr. Bassler and Mrs. Leard!! 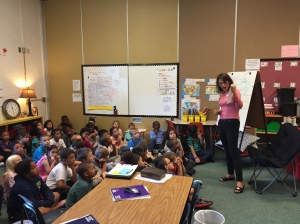 Wow, the teens at the Nora Roberts Young Writers Institute were fabulous! What a remarkably talented group! We had a number of writers who had already finished novels or had already won awards and contests, and we also had writers who were brand new to the craft.

Contest winner Sean Kenney started us off on the morning of the 9th by reading his horror story “Blink” so effectively I got chills!

Then author Brad Barkley served as our keynote speaker and told us about how he got into the writing business and how important it is that creative folks find a primary outlet for our creativity. He offered great advice about the writing process and about fiction techniques. Thanks, Brad!

Throughout the day on the 9th, Michele Poacelli, Kate Benchoff, Alicia Drumgoole, and I offered breakout sessions on dystopian fiction, action writing, romance scenes, quick write prompts, and world-building. Writers also had an opportunity to have their work critiqued by instructors and workshopped by peers.

On the 10th, we focused on publication advice, and the writers researched literary magazines using Duotrope. They also submitted work to Hagerstown Community College’s Hedge Apple magazine, where they will be featured in a special online edition in September.

We ended the institute with a Coffeehouse Reading, complete with the ambiance of lamps, couches, and tablecloths, and a good many writers presented their work to an audience of other writers, friends, and family members.

I was recently asked what I do with all the great feedback I get from my fellow workshop students in the fiction writing program at Hopkins. It’s such a great question, isn’t it? I’m in this fantastic program, with incredibly talented writers, and I’m supposed to be using their feedback to hone my skills and produce high-quality stories. But at the end of each workshop session, I’m usually leaving with 20 pages of typed, single-spaced feedback, all of it from different perspectives and sometimes giving contradictory advice.

Here are some of my thoughts, but I’m hoping others might share their ideas and insight from their own workshop experiences, too.

I try to look at workshop like I’d look at any other discussion or dialogue, real or fictional. There’s text and there’s subtext. The text (both written and verbal) is extremely helpful, but for every part of text, there’s a whole iceberg of subtext underneath, and that subtext is just as helpful, if not more helpful. The way in which people make comments can sometimes be even more important to me than whether someone lists three aspects to be improved or four aspects. If people are drawn to adamantly defend their position on a character, that says they care and I’m onto something. If people are drawn to look for far-out interpretations, it means I’m being too subtle and I pulled them out of the story by making it a puzzle to solve rather than a story to enjoy. If every single person in the workshop understands every single element in the story, it probably means I’ve made everything too obvious. But these are all usually communicated more in subtext than in text. Or so it seems to me.

People might have a problem with something on page 9, but sometimes I know the cogs of the story enough to know that why they are having that problem on page 9 is because I messed up on page 5 and didn’t include what I should’ve included. If everyone agrees wholeheartedly (but somewhat robotically) about how a character ticks, they may be saying this as a good thing about the story, but I might realize that the character is too easy to figure out, and then it’s really easy to sway those feelings on the next draft, with only 20 or so additional words.

The subtext is important to me. Not that I don’t like the text itself. The combination is crucial. Without the text, it’s like the iceberg is completely submerged and I’m totally blind. That’s why any and all feedback is helpful to me.

Or, to use another analogy, it’s like most people in the audience at your magic show can tell you when they’ve seen the card you were trying to hide, and some people might be able to suggest that it’s the angle of your hand that’s screwing up the trick, but it’s only the person that knows the trick and has practiced the trick that can tell you the real problem: that you pause in the middle of your banter at exactly the wrong moment and you draw attention to your thumb knuckle, which needs to be tucked more tightly by being drawn closer to the first knuckle of your pinky. In short, there are different levels of advice; the broad advice (85% of my audience can see I’m screwing up) is very helpful, but that deep advice about the thumb position and banter is a gem.

I try out most of the advice I get from workshop, whether those suggestions are based on text or subtext. I consider the advice and see if I can objectively figure out how that change would affect my story. Sometimes it’s easy to imagine because I’ve already tried it in previous drafts and I know it didn’t work. If I can’t imagine it, I almost always try it, treating it like a writing exercise. I save multiple drafts and think about “trying something out” rather than “changing my story” because I can always go back to the original file if the change doesn’t work. Worst case scenario, at least I’ve still learned a new technique. If the advice is something I really find myself balking at because I can’t imagine it at all, I try to remember that I’m being pig-headed and make myself try it. Sometimes the ones I can’t initially imagine at all are the ones that end up working the best.